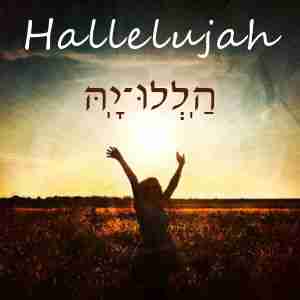 You would think that writing about so simple a word as “Hallelujah” would be easy. But it’s not. I remember years ago hearing a respected preacher say that the root of the word meant “thousands” and so “Hallelujah” means to praise the Lord a thousand times. I objected and was told that obviously my Hebrew was lacking!

Yes, my Hebrew is lacking. However my understanding was not. I decided to look and see what others are saying about the word Hallelujah, and found so many different spins on this word, that my head is spinning!

One person on a Christian website said the word is used 22 times in the book of Psalms, representing the Hebrew alphabet—the beginning and the end. The author was in error, but may still have had a possible perspective based on how the word is used. I looked the word up for myself with Accordance Bible Software. It occurs 27 times (28, if you count the one time it appears as “hallelu-yah,” with a dash); there are 22 standard letters in the Hebrew alphabet and 5 special “ending” letters.

One Rabbi wrote that since the name of God is used in a short form, and since the first usage relates to Amalek in Ex. 17:16, then “As long as there is room for evil and violence in the world, God’s rule is incomplete.” Hence, the highest praise of God using the full name goes for a different time and age and hallelujah acknowledges God in an imperfect world. This sounds good on the surface, but it raises a question—HOW is God’s rule incomplete? Granted there is evil in the world, but is God sovereign or not? If evil can thwart God’s rule, then God is not all powerful. Oh, and just one minor thing—the first usage of Yah is in [biblegateway passage=”Exodus 15:2″]—more on that later.

As a believer in Jesus, I am convinced of God’s absolute sovereignty, despite the evil in the world.

And then a few weeks after initially writing this post, I attended a praise and worship gathering. The speaker wanted to share with us the true meaning of hallelujah—sing and shout praise to the Lord with all our hearts. The meeting was rather emotional and everyone broke out into loud songs of praise. I’ve thought a lot about that incident, and two things bother me: 1) someone reliable taught this worship leader incorrect information about a simple word; 2) that worship leader did not double-check to find out if the word really has that meaning. To be fair, praising God with all one’s heart can be extrapolated from the usage of Hallelujah. Nevertheless, it is not the direct meaning of the word.

For me all of these meanings are lacking. They wax philosophical and do not look at some important points (perhaps someone else has, but I leave that for others with more time than I have to do the full research).

Here is what I have learned though, and for me, that makes Hallelujah a very important word, and we should be aware of what we are saying when we use it.

First, the term “Hallelujah” is used explicitly ONLY in the Old Testament in the book of Psalms, and then, only from [biblegateway passage=”Psalm 102″] (not 104 as the Rabbi wrote). From here it appears in various places through to Psalm 150. Hallelujah is actually two words in Hebrew:  “Hallel” (praise) and “yah” (a short form of the name of God). The short form of “Yah” actually appears for the first time in [biblegateway passage=”Exodus 15:2″] (The Lord is my strength and song…”).

In the New Testament the word appears only in [biblegateway passage=”Revelation 19:1,3,4,6″], ending with the resounding statement of God’s total reign: Hallelujah! For the Lord our God the almighty reigns.” There is nothing remarkable in the Greek word—it is a transliteration of the Hebrew word. What is remarkable is this: It is the ONLY place the word appears in the New Testament!

We all know what “praise” means, but let’s be sure we are all on the same page: to say or write good things about someone, to express approval of, to express thanks, love, or respect to God. (Note to my readers, the Webster learners dictionary is MUCH better than the standard one!)

We all think we know what “yah” is, but let’s think again. This specific shortened form of God’s name appears only 50 times in the Old Testament, and in each instance it refers only to the holy name of God, the ‘YHVH’ (Jehovah/Yahweh). This is important because there are many names in the Old Testament that incorporate the name of God, for example, Elijah, is My God is Lord. (Eli+jah). But this is all one name, not a separate stand-alone instance of “yah.”

The next time you say “Hallelujah,” slow down. Split it into two words and picture it in your mind, “hallelu” “yah”,  Praise God—the creator of the universe who revealed His unique name so long ago, the one who IS.

He never was not. He was and is and is to come. The only God worthy of being praised.

I’ve learned that Hallelujah is a serious word. It should not be said lightly, for I am offering my thanks, my reverence, and respect to God, saying He alone is worthy of true praise.

This was originally posted on June 12, 2017, and was edited on September 2, 2017. I would like to thank my readers for their comments that helped in making my post more accurated.

As most of you know, I’ve been quite busy working on my book. This week I crossed a major milestone—my book is now available on the USA Amazon website for presale! To my surprise, although I categorized it under Family Relationships > Dysfunctional Families, for the past two days it has been ranked as #1 […]

A Taste of Heaven

Since my last blog post there have been more than a few terrorist incidents in Israel. Tragically, they have been instigated by Muslims and Jews. One Jewish man killed another man, mistaking him for an Arab… and so the cycle of fear and violence continued… to recede into the background of the news when bad […]

Service and Support Beyond Compare

Well, I haven’t gotten close to what I wanted to get done today, and here it is getting close evening. Once I got started on what needed to be done, I found myself accidentally deleting ALL the websites I host, including this blog. I literally thank God for a wonderful hosting service like Bluehost.com for […]