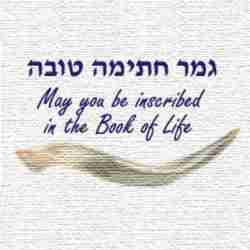 Today is Erev Yom Kippur, the Day of Atonement, or as one friend pointed out in a recent blog post, the Day of Atonements—since atonement has to be made for the High Priest First, and only then for the people.  Following a week of deep introspection, tonight most of the Jewish people are fasting and praying that their sins will be forgiven based on their fasting and heart-felt cry to God in prayer….

While the roads are busier in Israel today than they were when I first came to Israel, they essentially remain empty. Living in a mixed city such as Haifa, where we have a Jewish, Arab Muslim, Arab Christian and Messianic population it is remarkable that the silence of Yom Kippur is honored pretty much by everyone. It is not lightly that we say this is the holiest day of the year. For those who observe it with all their hearts, it is certainly the solemnest. Those who are not doing so, think about it, or ignore it… but the silence of this night makes one thing very clear—God cannot be ignored, since people know what it is that they are ignoring.

What is so important about being forgiven that it brings an entire nation to a standstill for 1 full day every year? Is it really just about placating an angry God, and getting Him to say He’s not upset with us anymore?

I wonder, does the dictionary definition of “forgiven” miss the point?

I think the key here is to analyze the definitions.

Is it enough for God to just stop feeling anger towards us?

Is it enough for God to stop blaming us?

Is it enough for God to stop requiring payment from us? (As though we can pay Him for what we have done!)

Based on the above definition, one can forgive and continue through life without any relationship with the person who gave offense. This is sometimes that theoretical forgiveness might offer to an abuser. Forgive? Yes. Enter into a relationship with that abuser again? Never.

So perhaps, Webster’s definition is spot on—for the world.

When God forgives, or call us to repent so He can forgive, it is with a greater purpose in mind—to restore us into a personal relationship with Him. This is what Yom Kippur was supposed to be about. A goat was sacrificed on the altar to deal with the sins of the people—a sacrifice similar to those made all year round. But Yom Kippur was different and required something else. The specific sins of the people were confessed over a scapegoat, which bore the moral punishment for the purification of the people, because sin had made the people’s souls as unclean as leprosy made one physically unclean.

“For on this day shall atonement [Reconciliation; restoration of friendly relations] be made for you to cleanse [literally, purify] you. You shall be clean [literally, purified] before the LORD from all your sins.”   (Leviticus 16:30 ESV)

Two goats, every year, covered the nation for one year—and throughout the following year there were ongoing sacrifices to keep on making atonement for their evil deeds. But purification from the moral stain of sin was only made on the Day of Atonement.

Hence, when The Day of Atonement was over, the hope of the people was for a forgiveness that cleansed them on the inside from their moral stain, and not only resulted in God truly forgiving their sin, but a restored relationship with Him. This was the hope of the people in the Tenach (Old Testament), and it is with this in mind that we can read the Psalms and consider David’s cry to God for forgiveness and restored relationship with God. They both went together!

Until the fall of the second temple; then something terrible happened—there was no more sacrifice for sin. The sages and rabbinical authorities had to come up with something to solve their problem, but that something has never had the authority of divine revelation and has no basis whatsoever on anything in the Tenach.

No more sacrifice for sin.

Does this sound familiar?

11Every priest stands day after day ministering and offering the same sacrifices time after time, which can never take away sins. 12 But this man, after offering one sacrifice for sins forever, sat down at the right hand of God. 13 He is now waiting until His enemies are made His footstool. 14 For by one offering He has perfected forever those who are sanctified.

Here in Israel, Jewish people greet each other with the phrase, “g’mar chatima tova”—loosely translated as, “May your name be written in the Book of Life.”

Believers in Jesus have the assurance that their names are written in the Book of Life. For us, this greeting becomes a prayer, Oh, may your eyes be opened and may you be written in the book of life—forever. Because this is what true forgiveness is, the price of our sin fully paid for, God’s anger set aside, and a full moral cleansing on the one who receives Him as Lord and Savior—resulting in a relationship with the Creator of the universe that begins now and will last through eternity.

This is the forgiveness that God gave you and I the moment we accepted Jesus as our Lord and Savior.

Is it any wonder that the evil one will do all he can to get us forget this truth? When we focus on our sin, our guilt, and our moral uncleanness, we are acting as though we are not forgiven and then we wonder why we feel so far away from God.

Introspection is good, but only to a point. The kind that keeps us on our toes is healthy, like a daily bath, or as Jesus did at the Last Supper, washing the feet of His disciples. We need to keep our feet clean and they will get dirty because we walk in the world. This means confessing the sins we become aware of every day, with the knowledge that we have been purified and forgiven!

Forgiven. Have you been struggling to feel forgiven lately? I know I have. Take heart. Go wash your feet, and rejoice, because Jesus has paid the price for our sin and our purification. He is the scapegoat and the sacrificial goat of Yom Kippur and He is the last and final sacrifice.

Tonight, let’s rest in Him and the assurance of our relationship with God knowing we are forgiven.

Have you ever noticed (if you live in Israel) how quiet it is on Erev Yom Kippur – before the holiday is even ushered in? There are already fewer buses in the morning, and the singing of birds is louder than the everyday hustle and bustle of life. People do less, speak more softly, and […]

Finding Hope in the Fire

Having a quiet time has been difficult lately. It’s like a push-me-pull-you with God. I want to read my Bible, I want to get into the Word more, and then I hear the ding of my phone, or I look at the clock… and suddenly it is hours later and I’ve barely turned a thought […]