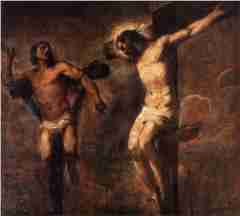 Today during Breaking of Bread (Communion), we sang the old hymn by William Cowper, “There is a Fountain.” As usual I sang using the Hebrew translation. On the second verse I sang a word, “gazlan” (גזלן) and realized I had no idea what it meant. So I read the original English. The words in English gripped me.

The dying thief rejoiced to see
That fountain in his day;
And there may I, though vile as he,
Wash all my sins away.

I couldn’t sing. All I could do was think and meditate on that verse—as vile as that thief on the cross? The following poem I wrote says it all.

May you be encouraged as I was, to rest in that wonderful forgiveness offered us through our Messiah and Redeemer, Jesus.

Never considered:
Before he repented,
he
mocked,
lied,
stole,
perhaps even killed—
just didn’t get caught.
Joined the other thief,
“Come down from the cross!”

Then he watched.
Jesus didn’t come down.
Was it His look?
Was it before or after
the agonized cry to His father,
‘Forgive them, they don’t know
What they are doing’?

Instantaneous repentance
on the cross.
Humility—
more real than his naked body
exposed for humiliation.
Pride died in conviction
not shame.

Love emanating from a cross.
Two offered hope;
one accepted.

“Today you shall be with Me in Paradise.”

And I, just as vile as he,
have the same hope
evermore.

The Thief on the Cross by Tiziano Vecelli, Italy, 1566
Dvora, Poetry, Scripture MeditationsPoetry, thief on the cross

Poem for the Day: Quickly

Have you ever had trouble putting your thoughts together? It happens to me all too often. When I find I truly have no idea what is going on inside of me, I sit down and write what comes. Usually it makes everything pretty clear for me. There is a lot to think about these days—if […]

In some places this season is filled with celebrations, decorations, and shopping. In others, the birth of Messiah is ignored. Yet, all those who believe in Him are well aware of the significance of this season whether they view it as a celebration or a desecration. Perhaps it is time to stop taking sides (whether […]

The Mud of Our Lives

It has been almost a month since I’ve written, not for lack of something to say, but rather, for too much and wondering where to start. From start to finish, my visit to the US was simply wonderful: reconnecting with family members I’d not seen in over 40 years; getting to know others better; renewing […]