Reality Check: Another Look at Job 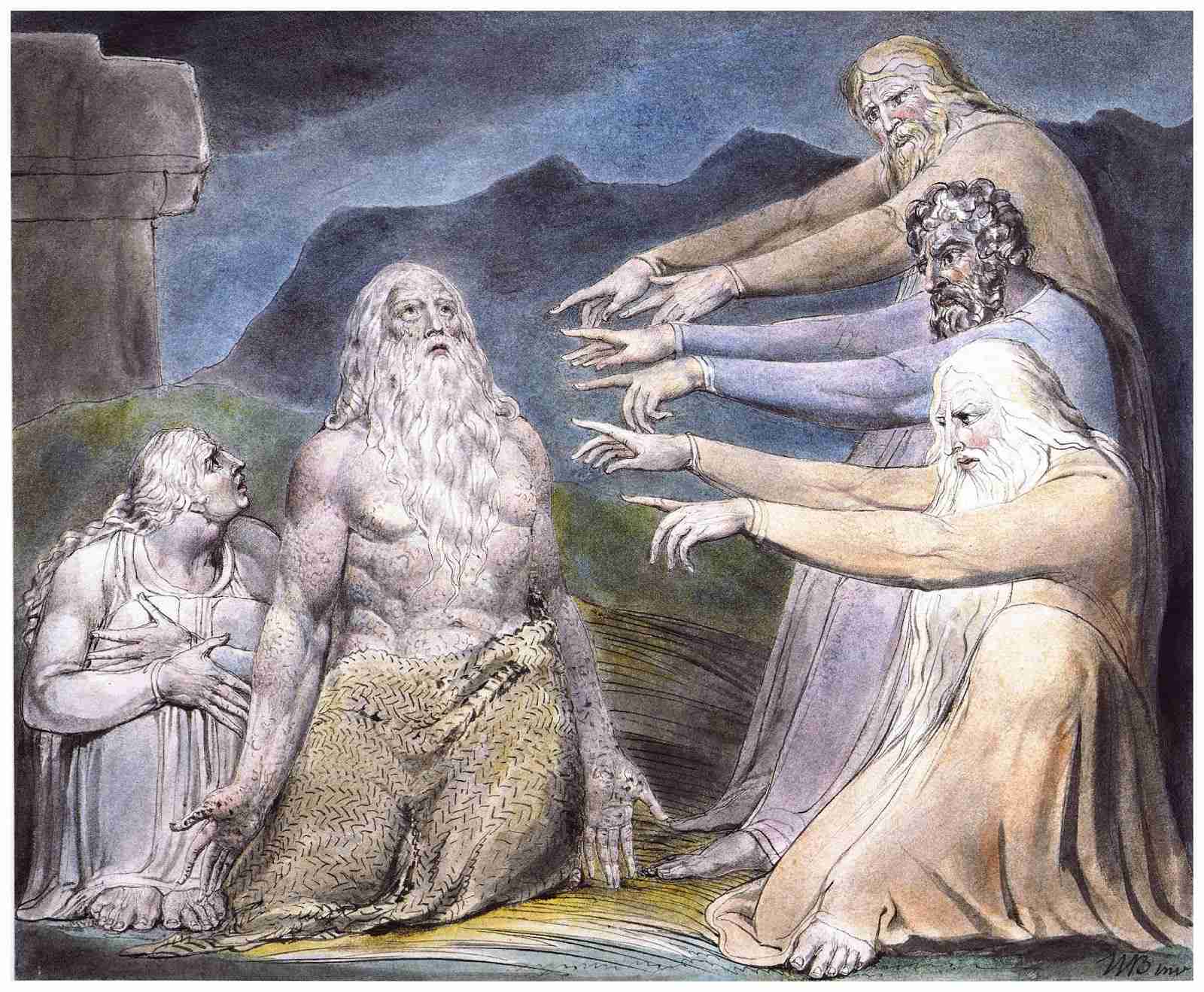 I let myself get so upset about things that seem overwhelming, but are nothing when I compare them to the trials friends are suffering with around the world, and around the corner from me. I get myself upset and out of sorts with service people who won’t listen to me, exorbitant prices, and going without my washing machine for a few days, while children are being beheaded because they won’t deny Jesus as their Savior.

I’ve been studying the book of Job with my Chinese students, and suddenly, I feel very like Job, after Elihu spoke to him, but before God spoke. Job didn’t answer Elihu. The text implies that God stepped right in and picked up where Elihu left off. I have to admit, I feel like there are a few minutes of silence, and then God answered Job.

When my students asked to study this book I was taken back. I have never been completely comfortable with it. I remember when my husband died, one of his brothers—who is not a Christian—said that when he was depressed he found Job comforting. So I reread it, or tried to. Odd how when I read the Bible to teach it, I find gems that I don’t find when I just plain read. So it has been with this reading of the book of Job. If I was going to skip chapters for the sake of time, I had to know what I was skipping and why, and what verses we should read and why. I needed to be able to fill in the blanks. Now, as we are approaching the end of the book, so much of it is starting to fall into place for me. The chapters that were so troublesome are becoming far less so, and I am beginning to see Job in a whole different way. It might not have happened, if the same night that we studied Elihu’s speech to Job, the teaching in the main meeting focused on John the Baptist and the response of the Jewish people to him. Suddenly amazing similarities appeared between John and Elihu, and Job and Israel!

Job is one of those books that needs to be read at least twice. The first time, it should be read through from beginning to end, without trying to figure anything out. The second time, it should be read out-of-order; focus on the ending first, then read the beginning, reread the ending, and then analyze the rest of the book in light of what is written in the beginning and end. When you do that, suddenly, everything begins to fall in place.

Elihu’s speech has to be taken very seriously because God did not include him among the friends who had spoken wrongly to Job. In other words, Elihu did indeed speak what was right. For modern-day writing, Elihu is rather long-winded. But for Biblical times, Elihu shows himself to be the best of friends. He is concerned with the proper order of things. He wants to honor all parties involved. He gives room for everyone to state their case. When he presents his case, he makes sure they understand that he is speaking from the burden in his heart, and not out of a desire to prove that he is right. In addition, he wants Job to understand that there is no finger-pointing coming from him, but rather, words of caution and exhortation, because in his anguish, Job who is righteous, is coming close to falling into some serious sins of attitude.

And here is the interesting part, Job’s “sin” is similar to that of his friends. Job completely agrees with them, that God punishes the guilty and rescues those that are His. Job, without hesitation, considers himself to be righteous. But he also sees all the “wicked” as being deserving of any punishment they get, and the worse the better. In fact, Job cannot even see himself as a potentially wicked person. He does not identify at all with them. Job is moving onto dangerous ground as he talks. Yes, he is working out what he thinks, feels, and believes about God, but in the midst of that, by focusing on his own agony and pain, and not being able to see beyond it—not once does he mention the anguish his wife must be feeling in the loss of her children as well, and in watching her husband suffer—he borders on rebellion. He is dangerously close to saying, “God, since you punish the wicked and not the righteous, and since I am righteous, YOU GOD have made a mistake and need to correct it.”

Job’s suffering has done what the hedge God had set around Job could not do—it is revealing the innermost parts of Job’s heart, sifting him, purifying him, and refining him. Elihu is helping Job to see the dross floating to the surface. In Job 36:15 Elihu says of God, “He delivers the afflicted by their affliction and opens their ear by adversity.” The hope presented in these words is great. As I meditated on this, I began to see the challenge of Satan to God in chapters 1 and 2 differently. Suddenly, I realized, this was no heavenly chess match where God was going to put Satan in his place, rather, God was using the evil desires of Satan to fulfill HIS own purposes in Job. God wanted to purify Job, and to cause Job to go deeper in his relationship with God. Unknown to Satan, God was quite pleased to remove the hedge around Job, so that Job would grow and mature in his faith. The clues are all there in chapter 1 verse 8, when God brings Job to Satan’s attention: Have you considered my servant Job…?

John the Baptist and Elihu

Clearly, Elihu was preparing Job to hear from God. He was, as the saying goes, preparing the way, plowing fertile ground. This is the same thing that John the Baptist did for the people of Israel. He was the voice of one crying in the wilderness, “Prepare the way of the Lord.” No one, except the Pharisees argued with him, and no one questioned his authority. They knew exactly who John was, who his parents were, and John’s message was clear.

Likewise, Elihu is presented in his lineage, and why he speaks is made very clear. No one interrupts him or questions his authority, and God’s silence regarding Elihu implies that He too is satisfied with Elihu’s role and what he has to say.

John warns the people of impending judgment if they do not turn from their evil ways, and gives concrete examples of what the people should do. He tells people not to steal, not to covet, to live out the fear of God in their lives in relationship to man. Likewise, Elihu calls to Job and warns him of the potential for pride and rebellion in his many words. He urges Job to consider in silence what has happened and to wait for God rather than to complain about his situation (the majority of his words), or complain about his friends’ lack of compassion (another good portion of his words). Few of Job’s words were aimed directly to God, most of his words were about God. Yes, Job made some amazing leaps of faith as he worked out what he believed, but it is as though he could not hang on to those wonderful truths because he was too absorbed in his own pain.

Worse, Job truly did not see in himself the potential to be wicked. He thought he had done all that he had to do for a right relationship with God. God was at fault, not he!

Job likewise, was in danger of becoming like the religious leaders in Jesus’ day. However, unlike their arguments with John, Job did not argue with Elihu. And so, when God came to speak, Job was able to hear, listen, and respond. Job is an example of how the nation should have responded to Jesus, and of how some did. In fact, Job is an example of you and me.

I don’t know about you, but as I have meditated on Job, I’ve begun to identify with him. As trials and struggles have come my way I’ve had amazing opportunities to see God work, teach me, change me, and to draw closer to Him. But like Job, I’ve also questioned God, fought Him, and in questioning God, I’ve questioned His love for me. The more I get my eyes on me, the more my words have multiplied, in anger, frustration, and self-pity. I am just very thankful that I’ve had more Elihus in my life than Eliphazes, Bildads, and Zophars.

Elihu’s plowing had been for good seed, like John’s preaching. Job was humbled before God. How he felt was no longer the most important thing; priorities were set right. Relationship with his creator was the first and most important thing. If that was right, he could live with everything else.

This was the beginning of Job’s healing. Forgiving and praying for his friends was the next step, and restored fellowship with his family was the last step. Through them, and in other ways, God moved and blessed Job; truly his ending was better than his beginning. That has been the prayer of my heart since I turned 50 in 2005.

Suddenly, the fairness of service people and having a washing machine don’t seem so important. I realize that our “happy endings” need to be redefined. Those children I mentioned at the beginning of my post? Their lives were short, but they are now with their wonderful Jesus—their end has led to a new beginning beyond comprehension.

God is indeed just, and HIS justice will be meted out. But for those of us who want absolute fairness? We need to be thankful that God is not absolutely fair—if He were, He never would have sent Jesus to save us from the ultimate consequence of our sin—eternal separation from God. And I find that I am indeed encouraged—God saved Job and He has saved me!

Photo Credit: Job and His Friends: From the cover of “The Wisdom Books” by Robert Alter

What Kind of World

Eight of us sat around a table last night. Seven Chinese students from Haifa University and the Technion—and me. We had finally gotten to chapter 10 of Judges. I had read and reread the material, but earlier that day as I had finished preparing the lesson, I felt I was being guided to just type […]

The day got off to a rather disconcerting start. I wanted to walk to work, even though I was late (I’d just missed the bus as well), and halfway to work, I realized I’d forgotten my time card. No problem; it’s happened to me before and I could write in my hours. But as I […]

When I married Rich and returned to the States to live, I experienced real snow and cold for the first time in years. Brrrr. I think I’m only half-joking when people ask me why I came to Israel and I replay, “for the weather!” It gets chilly here in Israel, but not that bone chilling […]