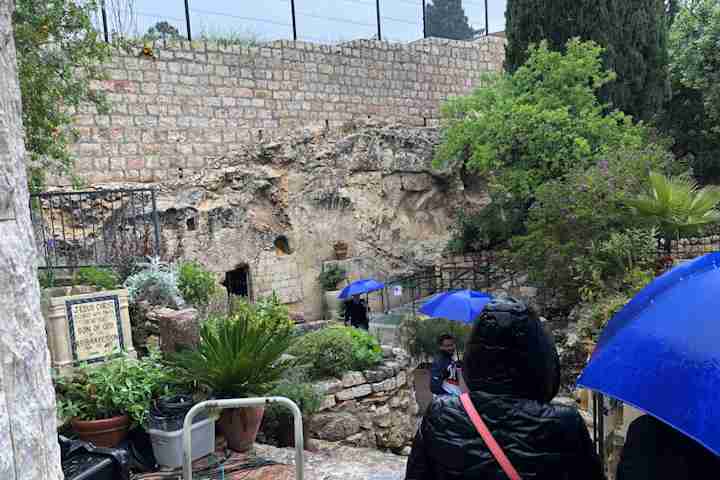 This year, Easter Sunday fell on the Sunday after Passover, and so I decided to visit the Garden Tomb. However, parking was horrid, and my friends and I missed the 7:30 am service. Thankfully, we finally found a place to park, had breakfast in a hotel near the Garden Tomb, and were able to attend the 9:30 am service – held in English, Hebrew, and Arabic as the winds began to gust, and attendees were bathed in cold rain and hail. Perhaps, in light of the message that was spoken and the political climate in Israel the weather was a confirmation of the spiritual condition of Israel and the Body of Christ in the Land…

A friend of mine recently wrote to ask about the political climate in Israel. I had no idea how to really answer. The truth is, same – same. The elections are over, Netanyahu is tasked with forming a fourth government under his leadership, and everyone is fighting for their piece of pie in the government. The wheeling and dealing goes on despite the Passover holidays, and life goes on.

The Politics of Voting in Israel

The truth is, I hate politics. However, and thankfully, despite everything that happens in the political world, God remains sovereign, working HIS will, and manipulating the powers to bring about His purposes. Somehow, I think many believers in Jesus have forgotten this.

With the approach of the elections the main question was Gantz or Netanyahu? Basically, a lot of people wanted to see Netanyahu gone because of his power plays, the possible corruption charges he is still facing, and his failure to deal with the real social needs of the people in the country. Others wanted to see him stay in power, as the “protector” of Israel and the only leader who can keep “enemy” far away. Now before you shout, “too simplistic” at me, please be kind to me… I am sharing MY perspective, and I know it is a bit simplistic… but bear with me.

The truth is, I didn’t like either group. I’ve not liked Netanyahu since the last election. I was actually getting ready to leave to vote for him, when he got on the radio and urged people to get out and vote, “otherwise Arabs will take over the country.”

I said “No!” I sat down, did an Internet search, and voted for someone else. I will never select a candidate to vote for based on fear or the desire for change. I must cast my vote for the person I believe will truly serve the needs of the people of my nation – the entire nation and not just my own special interest group.

This year, I still couldn’t vote for Netanyahu because he was still running a fear-based campaign. But Gantz wasn’t much better, concerned for the needs of the Jewish people in the Land and ignoring any of the non-Jewish constituency. Was there no one who wanted to represent the entire population, for the good of the nation? Yes, this is the Jewish homeland, but even Old Testament law made specific and clear provision for non-Jews who wanted to live amongst us because we too were once “strangers” in another land. The idea was, that the “stranger” should not be made to be felt a stranger, but to be a part of us, and in so doing, they would be attracted to the truth of the One True God and eventually, truly become a part of us.

I finally found a small party, with little funding, but one that was not interested in meeting the needs of a specific core group, but to look to the needs of all the citizens of the land, while maintaining a strong stance on security of the nation. Of course, they lost – but no, I did not waste my vote. I contributed to the balance of parties elected, that will have to be worked with to form a new government.

Currently, Netanyahu is tasked with parceling out ministerial seats to parties interested in working with him and eventually, based on give and take, and the political clout of the parties being partnered with, a government will be formed. A human, sinful, self-centered, power hungry government that God will use, despite itself for HIS purposes.

Dvora! How Can You Be So Negative?

I don’t mean to be negative, but I guess it does seem that way. But you tell me:

Perhaps it is my American upbringing. When I first learned about political issues in school, they still taught the concept of being a “civil servant” – someone who served the people of the land, often at great sacrifice to self. I have a feeling being a public servant is lost in today’s political climate. Now its about who has the most power and the strongest fist.

The Politics of Theology

But tragically, theology is riddled with politics. I see it on my Facebook page every day with pro and anti-Trump posts, as though Trump is the great Savior of America. But He isn’t. He, and others, are elected officials whom God is using – despite themselves – to bring about God’s purposes in the world and for Israel.

To listen to some people talk, you’d think that the only thing God cares about is Israel, and how America relates to it. Don’t get me wrong. I am not saying God doesn’t care about this, but I think He has many other concerns as well, and some of them just might be more important. No where in scripture is there a verse that reads, “By your vote, all men will know you are my disciples,” or “By your political stance, all men will know you are my disciples.”

The last time I read the Bible, the verse is, “By your love one for another, all men will know that you are my disciples” (John 13:35).

But here in Israel (and I’m guessing in your country as well), Christians are arguing and divided over political issues, who should lead and who not. But I’m more disturbed by some of the following issues I’ve heard discussed and the posited opinions over the past few years and recent months:

Where is the Love?

And what does all this have to do with the Garden Tomb? As the rain and hail fell, those of us who remained for the resurrection Sunday service were reminded of what Jesus did for us on the cross. We were reminded that at the last Supper, Jesus had to interrupt the disciples who were arguing about who was most important, by washing their feet, and reminding them to serve each other and love each other.

The speaker then added that he would be amiss if he did not remind us that the Body of Christ is as divided today, as those disciples arguing at the table were then. He shared that especially in Israel, never before has the body been so divided over political and theological issues… and that we are not united. He then added that he thought it was the same worldwide.

Prayer for God’s Definition of Unity

That is the point of my blog today, not to say that my opinion is right or wrong – most likely I’m very right on some issues and very wrong on others. Its OK. They are, for the most part, temporal issues and quite truthfully, the last time I checked, I am not God. I am not the judge, and I cannot point a finger at those who agree or disagree with me.

This morning, during my devotions, I was strongly reminded of who my brothers and sisters in Jesus are:

Therefore I want you to know that no one who is speaking by the Spirit of God says, “Jesus be cursed,” and no one can say, “Jesus is Lord,” except by the Holy Spirit. (NIV)

Can I love you even if you disagree with me? Can you love me even if I disagree with you? Unity is not about us agreeing on every detail of life, on every theological perspective, and on every political issue. Unity is about our focus, our purpose, our goal, and our aim in life being to give glory to God, to love one another, and to share with others the amazing good news that Jesus died for their sins, and there is hope for a life that is above and beyond what this world has to offer.

Unity is about being focused on the glory of God and the best good for my brothers and sisters… and I’m not trying to preach, but I must state clearly, that Jesus said my brothers and my sisters are not just the ones who are a part of the body of Christ. The Samaritan was brother to the Jew – an unheard-of thing in the time of Jesus. [By extension, one could argue that the Samaritan was not “saved.”]

Do I hurt for my unsaved brothers and sisters? Do I ache for their deliverance from the sin that makes them a prisoner to this world and would rob them of eternal life? Am I more concerned about a political solution for my nation, or for the fact that every man, woman, and child who does not know Jesus is by default headed to a godless eternity?

For you are saved by grace through faith, and this is not from yourselves; it is God’s gift— not from works, so that no one can boast.

This is the power of the life of Jesus in us who proclaim His name to change the world. Let us pray for HIS wonderful message to be spread, and for that we can must pray for our leaders in every nation. As it is written:

“First of all, then, I urge that petitions, prayers, intercessions, and thanksgivings be made for everyone, for kings and all those who are in authority, so that we may lead a tranquil and quiet life in all godliness and dignity. This is good, and it pleases God our Savior, who wants everyone to be saved and to come to the knowledge of the truth.”

I learned something new this Christmas season—how to openly enjoy and grieve the holiday, while totally rejoicing in and enjoying the holiday. I write about it here in this guest blog post that I was asked to write: The Year I Forgot About Christmas. I hope you will take the time to read it, since this […]

Car washed? Check. Laundry done? Check. House straightened up? Check. Cat sound asleep between computer screen and keyboard? Check. Oh, wait, it’s Passover… did I get rid of all the leaven in my house? Hmmm. Can I claim the Fifth Amendment? My answer will incriminate me. One of the greetings here in Israel is, have […]