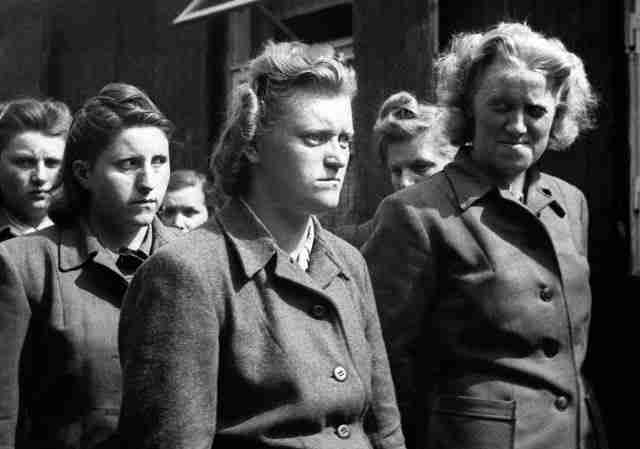 I first visited Yad Vashem in 1981 during a whirlwind tour of Israel. It was very different from what it was today. Simpler, starker, and in some ways, harsher regarding the reality of what happened during World War II—the Holocaust. 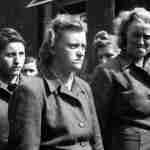 I will never forget the last thing I saw, on the wall to my left, as I exited the museum: this black and white picture of female SS guards after having been taken prisoner by the Allies at Bergen-Belsen is what I saw (AP Photo/British Official Photo). I remember looking at the woman on the front left. To me, she looked confused and bewildered. Her posture, everything, about her seemed to cry out to me, “What happened? Why am I here?” You can read a transcript from her trial here.

I remember looking at the others in the picture and thinking, ‘I could not be you.’ But the woman in front on the left? I thought, ‘I could have been you.’ When I have shared this with others, some have been quite offended. Others surprised. All have said, ‘I would never do that.”

What will we humans do to survive? We have read the horror stories, and watched the movies. Holocaust survivors lived it. We have a saying here in Israel, Never Again. Such an atrocity, as far as it is in our hands to perform, will never again happen. We will not do what has been done to us—ever.

A few weeks ago the unthinkable happened in Israel. Three boys were kidnapped. Looking back, I believe the army and the government new from the moment they learned of it—that the boys were dead. For those of us listening to the news, the hints were all there. But none of us listened. For a little over a week there were prayer vigils all over the country. As a nation we kept waiting to hear the news that they had been found and were alive. We prayed, some fasted, and when we got the news—we wept.

Then the unthinkable happened. An Arab boy was kidnapped and burned to death by Jewish people. And then the missiles started flying, and now we are in an untenable conflict and there is no end in sight until one side or the other yields.

I was talking with some friends about the speedy turn of emotions, from crying out to God to a cry for revenge. What happened? What happened to our ‘never again?’ Not everyone gave in to this violent spirit—notably not the families of the boys who were murdered—Jewish and Arab. But those around them? People had hope. And as Proverbs says, “Hope deferred makes the heart sick.”

Only God can heal that kind of heartsickness. Without His healing touch, the sickness becomes a festering wound. This heart sickness has infected the peoples of this region, and the cure is not missiles, but a Savior.

Lacking a Savior, people turn to missiles, guns, violence, political organizations, and anything else that will bring about the desired solution. Don’t get me wrong, I am not a pacifist. When there is a need to fight, we need to fight. Tragically, when we fight, there are wounded—and yes—people die.

Hope for peace has been deferred yet again. Our people are sick. They are also fearful. Thankfully, miraculously, Iron Dome has given us amazing protection. But it is not invincible. Yesterday a woman shared that she and her family had been “miraculously” saved. A missile got past Iron Dome and hit the porch of the woman’s home, mere meters from a direct hit to her and her family on the other side of the house. A miracle…

The Palestinian people don’t even hope. They are trapped in a double fear. In English we say, “Damned if you do, damned if you don’t.” That is what one video I saw shows— Civilians running out of a building that the Israeli army has targeted. (How did the civilians know? They had been warned by Israel.) Suddenly you see several people on the rooftop of the same building that has been targeted! Why? Because Hamas, their leaders, gave them a choice, get on the rooftop or we will kill you. In many cases, Israel then aborts the attack, to spare these people. But in some cases, the attack has already been initiated. The world cries out that we are murderers—a new cycle of hopelessness, fear, and grief is initiated in Gaza, and the war continues.

The mistake we make is to think that we are incapable of evil. Apart from God, we will do anything we need to and want—to survive. That is what the picture I’ve posted here will always remind me of. When self-protection, fear or hatred motivate our actions, the result is horrible for all involved.

The battle is not against the Palestinians, but against Hamas—and there is a distinction. Some people in Israel forgot this for a moment, and the situation escalated—but sooner or later it would have escalated. The arms that Hamas has did not get there overnight. Long range missiles that can reach Haifa from Gaza don’t grow on trees. While Hamas has been using their money to arm themselves to fire at will against Israel, Israel has been using their resources to develop Iron Dome—each intercepted missile costs ~$50,000 to protect our people.

What are we to do in the midst of all this? As believers in Messiah, we must, especially at this time, take I Timothy 2:1–3 seriously. It reads:

We must pray for ALL the leaders, great and small, friend and foe, near and far. If ever there was a time where godly influence is necessary, it is now. Pray for the safety of Israel and her people; pray for Gaza and the Palestinian people; pray for the leaders of Israel and the leaders of Hamas… The purpose, the goal? That we may lead peaceful, quiet lives, godly and dignified in every way. This is pleasing to God, and this is what those who hunger and thirst for righteousness truly long for. May we also be willing for God to use us to answer those prayers. May ours be a voice of compassion accompanied by a longing for God’s justice. He is a true refuge to all who rely on Him and call upon His name—wherever—whoever we are.

I pray that my thoughts will be encouraging to us all during these difficult times.