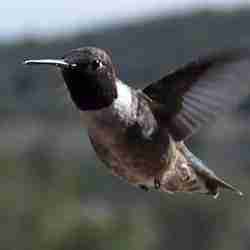 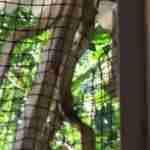 This is how the hummingbird got in

He must have been seduced by a lone bleeding heart blooming in my window, or was it the scent of mint from the plant next to it? The metal screen covering the bars on my window didn’t connect at the top and he slipped through.

When did he discover he was trapped? Was it when Cleopatra pawed at the window, noting his fluttering movement in the window? Or when Pharaoh joined her, adding their mewling cries to the hummingbird’s frantic fluttering. First flying up, then down, grabbing metal screen and trying to pierce his way through.

It was the cats who drew my attention to the closed window—thankfully closed so that I could enjoy the air conditioner after a short walk in the summer sun. 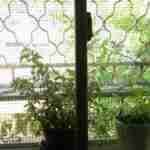 The hummingbird was flying against the mesh on the far left, but he flew in from the top right!

I locked the cats in my bedroom, pulled out my stepladder and wondered what to do. I pulled out a long knife in a plastic sheath, and tried to direct the bird toward the only hole it could have flown in through, but he was too panicked and kept flying in the direction he wanted, open air and a tree in the distance, not the closed in side of the window covered shaded by greenery. 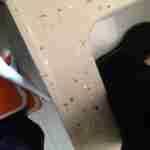 I reenacted this for you to see

Finally, I realized I would have to catch him. Me? With bad back and wobbly knees? I said a prayer, and reached into the window. I was too short. I was going to have to do something I’d never done before if the hummingbird was going to be rescued. I focused on the rescue and not on me, and worked my leg into the kitchen sink, with one leg on the ladder. Now I could bend enough into the window, and reached for the bird. On my second attempt, my right hand-held him gently within closed fingers. But he was struggling and I didn’t want to squeeze tighter and hurt him. Without thinking I cupped my other hand over him so I could release my right hand a bit. The bird struggled less, but I knew, he was just waiting for his moment.

Now I had to descend the ladder and get him safely out of the house. Easier said than done. My right leg was in the sink and my left leg was on the far right side of the ladder next to the sink, and I had no hands free. I tried to bring my right leg down onto the next step of the ladder, but it was too far for me to bend without grasping something. I did the unthinkable, I rested my right foot to the left of my left foot, and then somehow, hands free managed to shuffle my feet into position. I still needed to get down the ladder… so I leaned my arms on the top of the step-ladder and worked my way down. 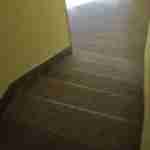 I had barely opened my hand when like a dart the bird had shot free and flown to the nearest branch. It sat there panting looking up at the sky, while I looked at it in wonder… amazed by what had happened.

The hummingbird had been so tiny. One misstep, one squeeze too hard and it would have been dead in an instant. If I had let it go too soon, it might have died trying to get out of my house. The potential power I had over this poor innocent creature.

When it sat flew to the branch, for a brief second, I wanted it to acknowledge me like you see some animals do in the YouTube videos. Just a little gratitude? I had saved it? Didn’t it know that if the window had been open, my cats would have gotten to it instantly… 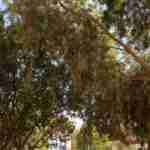 The tree at my entrance

But he was, after all, only an innocent and wild hummingbird, and I was only a human being—not it’s creator.

And I began to wonder, how many times has God tried to point me in the right direction, but in my panic, I just couldn’t see His hand trying to guide me? How many times has he had to wait until I was too weak to fight Him, so He could rescue me and bring me to safety—only for me to fly off in my own direction yet again, with not one thought of gratitude towards His saving grace?

I am thankful I had the privilege to rescue the humming bird, and to be reminded, in such a special way, of God’s enduring love for us.

A Fresh Revelation of You – Lord

Yesterday, while driving to the gym, I was listening to Moody Radio (yes, all the way in Israel). Dr. Erwin W. Lutzer was speaking and his words caught my imagination. Describing Moses on Sinai, after 40 days, he explained that Moses still hadn’t had enough of God, and asked, “Show me your glory.” After 40 […]

Where Does the Time Go?

As I sit to write, I realize that it has been two months since I last posted anything. How can this be? Is it possible that I have nothing to say? No… I think in a way I have too much to say and not enough time to get it all in. These past couple […]

I always tell people that today is a new year… from this day exactly a year ago. And without fail, they give me a weird look. I suppose you have to be in my brain to get it. I was brought up with January 1 as being the New Year. Then I moved to Israel. […]