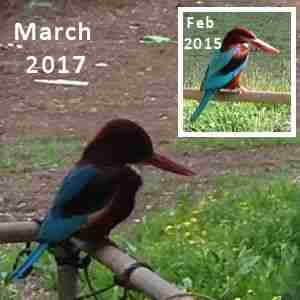 I should have known it was going to be a special day when I looked out my window this afternoon. Every spring for the past few years a beautiful bird sits on metal bars outside my window. Every year he poses regally, quite aware of his beauty—and that my cats can’t reach him. This year, when I whistled to him, he chirped back. He seems a bit bigger than a couple of years ago, but I’m sure it’s the same bird. Despite the clouds and chilly day, spring is here.

The wonder of nature never ceases to leave me in awe. With the Psalmist, I am in awe of the beauty rendered by the Creator. Despite the way we humans mess up our world, spring still comes, and with it a taste of heaven.

But you know what leaves me in even more awe than the beauty of nature? I’ll tell you—it is the way He moves with His spirit to work in the hearts of men and women like you and me.

Tonight at the Chinese meeting, I gave everyone a text to read. However this time, instead of me asking questions, my students had to create their own questions for us to discuss. So nothing was really planned in advance except the passage we read, Mark 12:18–34.

There were expected questions, such as, “what is the bush in verse 26?” One of the students said it was about Moses.

“No!” another exclaimed, “its Exodus.”

We looked the passage up and read it, discussed and moved on to the next question.

“I have a question,” one young man queried. We had been discussing Jesus’ statement that God is the God of the living and not the dead. “Let me get this right,” he continued. “Abraham, Isaac, and Jacob were already dead when God spoke from the bush, right?”

“Then why didn’t Jesus say that God is God of the dead?”

Each one shared something, and we entered into a discussion of physical versus spiritual death. In fact, the rest of the lesson focused on the surety of death, but that if one had faith in God, then although their bodies might die, their spirits would experience life forever with God, and that we have been promised new bodies that won’t die.

The lesson ended and we prepared for the main meeting. The guest speaker got up to speak, and what did he start out talking about? Why God is the God of the living!

But it gets better. A few weeks ago, I had spoken on understanding God’s glory, so that when we talked about God’s glory everyone would have a solid concept in their mind, and not some vague idea of brilliant light… One of the verses I had closed with was 2 Corinthians 3:18, which was more a conclusion that would need discussion in the future. It talks about how those who keep their eyes on Jesus are changed from glory to glory—God pours out His glory on us and we reflect it back to a world in need of Him.

After the speaker finished talking about death vs life, he turned to 2 Corinthians 3, and focused on the glory aspects of the passage (7-18). You got it—He began talking about glory what glory is and how it’s perceived by others, and how we are changed by God’s glory! It was as though the speaker had picked up from the end of my lesson and picked it up to bring it to the conclusion.

Usually I’m the only one that notices when this happens, but this time several people noticed these amazing “God-incidences” (as opposed to coincidences). One of the students in particular pointed it out later on as we all sat together at a meal and talked about what we had learned.

“Did you notice,” the student said, “the speaker was talking about what we discussed in class! How amazing!”

Likewise the translator shared that when they had read the sermon notes in preparation, she’d asked the speaker, “Did you talk to Debbie?”

I don’t know about you, but I need these reminders that God is active in all of my life—from the bird outside my window, to a discussion in an English class or a confirmation of a teaching I’ve given via another teaching. Reminders that God is really working and moving through me, whether I see it or not.

So today I’d like to encourage you to keep your eyes open for those amazing God-incidences that encourage and glorify our wonderful Father who truly cares for us exceeding beyond all we can ask or imagine!

If you’d like, use the comments to share the God-incidences in your life. Let’s encourage one another and praise Him!