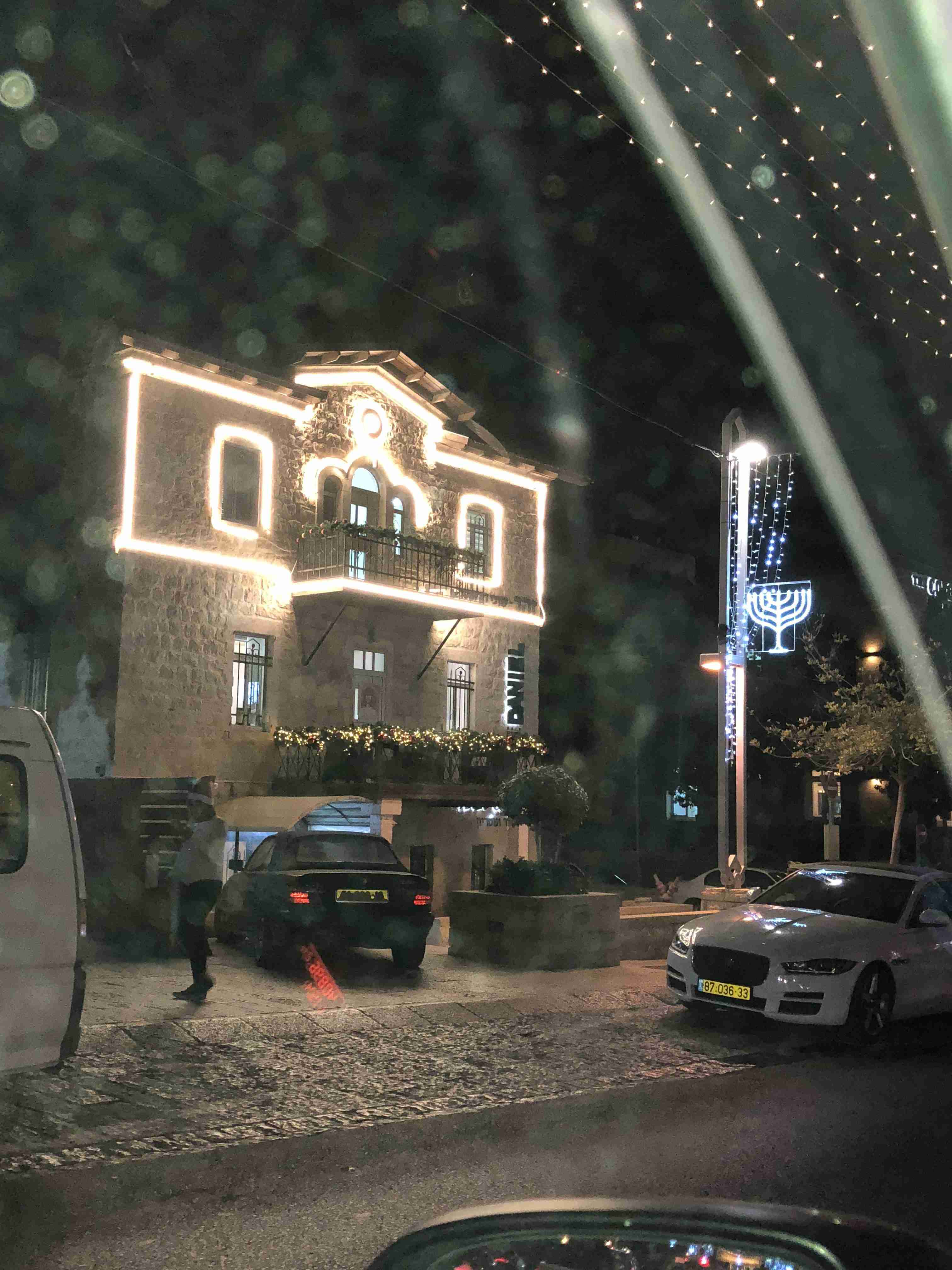 Recently a friend sent an article to me written by well-known commentator, author, and lawyer, Ben Shapiro. In it he critiques the understanding of Hanukkah by turning it into the Jewish version of Christmas. He points out that Hanukkah “after all, is about a war: a war against Hellenism, the attempt by Greek forces to force a pagan vision upon the Jews.” He then points out the refusal of the people then,to allow themselves or their land to ruled by “foreign gods.” He then rightly points out that “Judaism was a lifelong commitment worth defending and protecting.”

However, he then moves his comments to a tragic commentary on Christmas. “This authentic view of Hanukkah enables Jews to see Christmas in a different light: not as a competing holiday, but as a ritual complete with aesthetic beauty but lacking any Jewish spiritual relevance.” [Emphasis my own.]

The Spiritual Relevance of Christmas for the Jewish People

Shapiro made good points, and I enjoyed the article, but it saddened me to see that he views Christmas as lacking any Jewish spiritual relevance.Yet I suppose the fault lays within the very roots of history that has indeed progressively wrapped up Christmas in a variety of wrappings, traditions, and winter feasts. How sad, when Christmas is supposed to be the celebration of the birth of the Jewish Messiah.

Ok, ok, I know some of you believe we shouldn’t celebrate because it is based on a pagan holiday, or because it isn’t the actual date that Jesus was born, or for a number of other reasons… but for those who do,how could we have missed the Jewish importance of this holiday… the Messiah is born!

Sadly, European Jewry found themselves persecuted by Christians,particularly around Easter and Christmas time. Here in Israel, there are Jewish people who hate the holiday because of what it represents in their minds –death to the Jews!

My father was a Jewish believer in Jesus, and Christmas was his very favorite holiday. He wasn’t influenced by fundamental Christians or the history that he certainly was aware of, with family hailing from Lithuania and Austria-Hungry. As a third-generation American he had every reason to consider Christmas as suspect. But he loved Christmas, with all the trappings, tree,decorations, tradition, and in his eyes the most important, midnight Christmas service singing songs and ending with communion.

I remember him once saying that Christmas celebrated the birth of his savior. How could he not love it?

Still, I can understand how the significance of the holiday can be up for grabs in the eyes of those who don’t believe in Jesus.

The Spiritual Relevance of Hanukkah for Christians

Hanukkah, on the other hand, is of some Christian spiritual significance, and apparently both Jews and Christians are totally unaware of it. Or is it simply a lack of understanding, not putting 2+2 together in base 10 and coming up with 4?

You see, Jesus leveraged Hanukkah to point to Himself as the Messiah, the promised one of God. Take a look at John 10:22-30.

22  At that time the Feast of the Dedication took place at Jerusalem; 23 it was winter, and Jesus was walking in the temple in the portico of Solomon. 24 The Jews then gathered around Him, and were saying to Him, “How long will You keep us in suspense? If You are the Christ, tell us plainly.” 25 Jesus answered them, “I told you, and you do not believe; the works that I do in My Father’s name, these testify of Me. 26 “But you do not believe because you are not of My sheep. 27 “My sheep hear My voice, and I know them, and they follow Me; 28 and I give eternal life to them, and they will never perish; and no one will snatch them out of My hand. 29“My Father, who has given them to Me, is greater than all; and no one is able to snatch them out of the Father’s hand. 30 “I and the Father are one.”

Most people miss this because they don’t know what the “Feast of Dedication” was. That was Hanukkah. The feast was to celebrate there dedication of the Temple following the victory of Judah Maccabee and his army over the Greeks.

As Ben Shapiro pointed out, a war had been won against idolatry, and it truly was a victory for the Jewish people. At this time of year, with the memory of a political victory in mind,the hopes of the people for their Messiah would have been great. This is why some of the Jews ask Jesus to give them a plain answer. Was Jesus the one they were to hope for or not? Keep in mind, the people were sick of Roman rule. They wanted their own nation, their own customs, and their own identity as a Jewish nation. In other words, the people, like Shapiro and many others, viewed the most important thing to be the national victory and maintaining of their Jewish identity. The victory over idolatry was important only in how it related to their Jewish identity – not in the spiritual victory achieved by deposing false Gods!

Everyone exalted the works of Judah Maccabees, and what Jesus was really saying was that His works spoke more loudly than the Maccabee victory; Judah did not heal the lame or raise the dead. Jesus’s message was very clear and his listeners should have known who he was. And some, His sheep, did – but most did not.

The message here is the same for Jewish and non-Jewish people, but for Jewish people, the statements that Jesus made were strong then and now. “I and the Father are one,” was unacceptable to most of His listeners then… and now. Their idea of God could not tolerate this and was not open to change, and so, they wanted to kill him. Many Jewish people now,like then, are so absorbed with maintaining their Jewish identity that they are missing their own Jewish Messiah.

Some Things Can’t Be Shared…

I am not writing this to judge my people. I know that the Lord loves them and is longing for them to return to Him. I know He will continue to deal with them.

Nevertheless, this is going to be one of those posts that I will only share on Facebook with my friends who are NOT Jewish… because most of my non-believing friends truly will get really upset. They won’t understand that I only want them to come to know their own God in a deeply personal and healing way, and that like my father, they won’t stop being Jewish if they believe in Jesus.

However, as Christians, I hope you will take Ben Shapiro’s critique of Christmas to heart. Have we filled up the holiday with so many trappings that we’ve lost sight of our Savior who was born, lived, and died, a Jew? Raised from the dead, He is clothed in His identity as the Lord of Lords and King of Kings and remains to be accepted as the Jewish Messiah.

Because of that many of us celebrate Christmas. How can we not? Like my father said, “How can I not celebrate the birth of my Savior?”

Shown in the picture: The 2017 Haifa Holiday of Holidays festival where Jewish, Christian, and Muslim holidays are celebrated.People come from all over Israel to enjoy the festivities. Haifa is the only city in Israel with this kind of festival!

This year has felt more “Christmassy” than previous years. Partly it’s been because of the preparations for Christmas programs in my own and the Chinese congregation. But another reason is Haifa’s annual “Holiday of Holidays” when Christmas, Hanukkah, and a Muslim holiday (although I’ve never received a conclusive answer for which one) are celebrated. A […]

Ambivalent Joy… Getting through the Holidays

What kind of a title is that? I suppose it actually expresses quite well my gut feelings when it comes to the Christmas and New Year holidays. But the more I think about it, I wonder if you too meet this season with a certain ambivalence at times. Now don’t get me wrong… we have […]

I learned something new this Christmas season—how to openly enjoy and grieve the holiday, while totally rejoicing in and enjoying the holiday. I write about it here in this guest blog post that I was asked to write: The Year I Forgot About Christmas. I hope you will take the time to read it, since this […]