Getting a Handel on Things 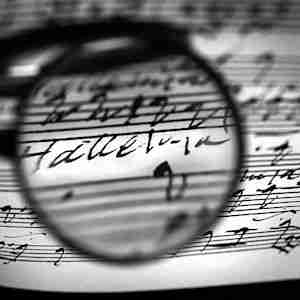 Nope—for a change I did not spell “Handel” wrong. You see, the highlight of my past week was going to hear Handel’s Messiah in Hebrew! It brought back so many memories, particularly of my college days. I remember being part of a large choir and singing, despite the desire to weep tears of awe at the power of God’s word. It is one thing to read His word, another to hear it, and yet another to sing it with all your heart, surrounded with others doing the same.

There I was in the audience enjoying the music. The concert was almost over, and the focus of the music was now the second coming of Jesus. Then it happened, the phone of the person in the row behind me rang. Not a gentle ring, but rather a loud buzz followed by the worst music one could imagine on a cell phone, particularly in the midst of a concert.

To be truthful, I was already quite frustrated. It took the conductor gently smiling and waving “no” to get people to stop clapping after every song. Then there were the people behind and next to me who insisted on talking throughout the concert—talking, not whispering. OK, I could work on tuning them out. But that cell phone was the last straw, for me and the woman next to me. In unison we turned on the person behind us with loud shhs, and I even said a harsh whispered, “turn it off.” Our looks would have killed and my tone of voice was far from kind.

31 If God be for us, who can be against us? 33 Who shall lay any thing to the charge of God’s elect? It is God that justifieth. 34. Who is he that condemneth? It is Christ that died, yea rather, that is risen again, who is at the right hand of God, who makes intercession for us.

The person finally shut off their phone, and I turned back to listen. I suppose in any other world I would have been justified in my reaction… but there is that word—justified. Isn’t it God who justifies or condemns? Yes, the woman behind me was guilty of rudeness, but I was guilty of something worse—an unmerciful spirit.

Now, as I prepare for Passover, I am reminded again of God’s great mercy extended to me, and to all who place their faith in Him. As I consider placing the leaven of malice and an evil heart aside I realize that as a follower of Jesus, He calls me to a higher standard. My irritation may be understandable but lacked grace and mercy—the same grace and mercy extended me by the blood of Jesus.

7 Clean out the old yeast so that you may be a new batch. You are indeed unleavened, for Christ our Passover has been sacrificed. 8 Therefore, let us observe the feast, not with old yeast or with the yeast of malice and evil but with the unleavened bread of sincerity and truth.
I Corinthians 5:7–8

This year Passover and Easter are aligned. That doesn’t happen very often. I’m looking forward to the Passover Seder on Friday evening and the sunrise worship at the Garden Tomb on Sunday morning. As I consider the ancient truths of Passover and its fulfillment in Jesus, I want to be changed. I agree with Paul and Handel, as it is written, we shall be changed, and those words, read, spoken, and sung, give me great hope. But now, in this life, the real challenge is to live it well. I pray for a deeper yielding to my Savior; that my life may reflect the grace and mercy He has extended to me, in sincerity and truth.

I wonder if time passes as quickly for you as it does for me? When I was a child, I recall how long summers were. They were tastes of forever, with trips to the beach, hikes at Sleeping Giant “mountain,” and long evenings curled up with a Nancy Drew or Bobbsey Twins mystery. Then, suddenly, […]

A Fresh Revelation of You – Lord

Yesterday, while driving to the gym, I was listening to Moody Radio (yes, all the way in Israel). Dr. Erwin W. Lutzer was speaking and his words caught my imagination. Describing Moses on Sinai, after 40 days, he explained that Moses still hadn’t had enough of God, and asked, “Show me your glory.” After 40 […]

Where Does the Time Go?

As I sit to write, I realize that it has been two months since I last posted anything. How can this be? Is it possible that I have nothing to say? No… I think in a way I have too much to say and not enough time to get it all in. These past couple […]