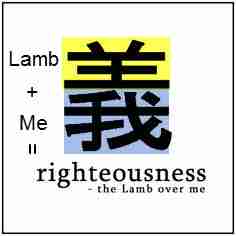 Wednesday marked the beginning of Chinese New Year celebrations. Wherever Chinese people are, there is some remembrance of the New Year. Here in Israel it was celebrated at the Chinese Embassy, by students in the university, and of course, amongst my Chinese friends.

This year is the year of the Sheep (or ram; the same word in Chinese). I celebrated twice: once in a “family” atmosphere with Abba and Emma Wong. I don’t recall when I started calling them “Abba” (father) and “Emma” (mother), but it was long before Abba Wong began leading the Chinese church and I started teaching English to the Chinese students. It seems natural to call them Abba and Emma, and so it was special to celebrate with them in their home. We ate hot pot (raw meats and vegetables cooked in boiling water at the table; the liquid then becomes a soup to end the meal), and we watched Chinese New Year celebrations on TV. There was even a comedy sketch with a poignant ending that had English subtitles. The message? Everyone wants to celebrate the New Year with family, so do what you can to make it possible.

Apparently, Chinese New Year celebrations began with the legend of the Nian monster. Nian had the head of a lion and the body of a bull. A ferocious animal, if lived in the mountains and hunted; when prey was scare it would enter villages and hunt there, terrorizing the people. Over time the villagers realized that the ferocious Nian was afraid of three things: the color scarlet, fire, and noise.

Eventually, the villagers developed a plan. The next time Nian entered the village they agreed to have a fire in front of every door, hang a scarlet painted board in front of every house, and to make noise at night rather than to sleep. The monster was scared and fled the village. The next year they repeated the ritual and it has been passed down generation to generation until today, and thus the custom was established to have red boards on the door posts, light a fire, and make noise for the New Year.

Red boards on the door posts. Is it merely a coincidence that the Israelites were protected from the death of the first born by placing the blood of the Passover lamb on their door posts? Interestingly, in Chinese, the symbol for sacrifice includes the symbol of a sheep.

As I thought about Passover, and the blood of the lamb that saved my people from the death of the firstborn, I was next reminded of the source of my righteousness, the perfect Lamb of God. Interestingly, in Chinese, the word for righteousness is made up of two sets of symbols, the symbol for “lamb” placed over the symbol for “me.”

In that symbol, “I” am literally under the “lamb!” What an amazing way to show that my righteousness is based on my position, under the lamb, covered by His blood! This is but a small taste of how the Chinese language points to the truths in scripture. Isn’t it special?

Passover: As Though I Myself Was Delivered

Yes, I’ve been writing a lot more than usual. These past few days I’ve been feeling such joy and peace in our wonderful Lord Yeshua (Jesus). Perhaps it is the time of year? I will try to space my posts in the future, but today is the evening of Passover, the beginning of my favorite […]

Car washed? Check. Laundry done? Check. House straightened up? Check. Cat sound asleep between computer screen and keyboard? Check. Oh, wait, it’s Passover… did I get rid of all the leaven in my house? Hmmm. Can I claim the Fifth Amendment? My answer will incriminate me. One of the greetings here in Israel is, have […]