How Rich and I Met

Several people still ask how Rich and I met. We had written a joint account to be posted on the website where we met. But we kept a copy and I have posted it here. If this is your first time to visit the site, Rich died on August 16, 2010. No, life is not always kind. But O, our Lord is so very kind. I remain so very thankful that God brought Rich into my life. I pray that our joint testimony remains an encouragement to you.

Rich
On Monday, January 8, I drove from Grand Rapids, Michigan to Toronto, Canada. I was scheduled to pick up a very special person at the Lester Pearson International Airport at 4:20 PM. But I’m getting ahead of myself.

My trip to Toronto actually started last August. Dvora contacted me with a smile on ChristianMingle. I was not looking for anybody outside of the United States, but I was committed to responding to anybody that contacted me. Some women as young as 19 contacted me, mostly from the Philippines or the Ukraine. None of the women who contacted me from overseas got anything but a “no thank you” from me except Dvora. I asked her “why” she thought we might enjoy writing to each other. She said she just thought she’d like to get to know me if I attended her church. So we started writing to each other.

When we first started writing she it was during last summer’s war. She got sick and couldn’t make it to work every day, so she had the time to write me more than she would have. The city she lived in was hit by three missiles. One hit about 100 yards from her house. The city she works in was hit by many missiles.

Dvora
I had given up thinking I was going to meet anyone! I was hoping to stay in Israel, but open to change if the Lord led that way. But I seemed to get mostly only weird e-mails. A few people thought I seemed nice but too far away. So when I first wrote to Rich, I was just thinking in terms of pen-pals–he just seemed like a really nice guy!

Rich
She moved to Israel 24 years ago as a self-supporting missionary. For the past 12 years she had a ministry teaching English to Chinese university students studying in Israel. She used the Bible for the textbook and the Lord used her to lead many of her students to Christ. Last year the funding ended that brought these students to Israel and her ministry ended. She said she went into mild depression for several months over that.

Dvora
I never thought of myself as a missionary. In Israel, my people think that a missionary is someone who is paid to force people to believe in Yeshua, and perhaps even pays them to believe in Yeshua. This is not the case though. I was in Israel because  I knew that the Lord wanted me there. He had opened the door and He has supplied for me all these years. In fact, before Rich came into the picture, one of the highlights of my trip to Toronto was to visit some of my former students!

Rich
Dvora works as a technical writer for a high-tech medical equipment manufacturer. She has a Masters Degree in Technical Writing. She has been with this company for 10 years. Since she has been in Israel she has felt really at home there and didn’t believe she would ever leave Israel.

Dvora
Absolutely. In fact, I’ve been known to tell people that if I ever say I am going back to the States to live, please shoot me and put me out of my misery! They joke at work that I am more Israeli than the Israelis (unless they disagree, and then I am very American!).

Rich
On October 17, I felt led to really ask her if she would consider a serious long-term relationship. She was tempted to simply push the ‘delete’ button and go on with her life, but the Lord had been doing some things behind the scenes that caused her to hesitate at saying a quick ‘no’, and she agreed to pray about it and to ask others, including her elders of her church and her best friends. On October 31 I informed her that we were ‘officially courting’, meaning we would each be seeking God and trying to discern if we should come together in marriage.

Dvora
I don’t think space will allow for all the behind the scenes things.. briefly.. a colleague at work had challenged me that the real reason I had never married was “you are scared to death. You wouldn’t even look at anything that hinted of marriage.” With that kind of challenge ringing in my ears, when Rich asked me to “pray” it was hard to say no. So I told him that I didn’t think it was very likely, but I do like talking with him and I would pray. At one point he wrote to me, “I cannot ask you to give up everything you have in Israel.” I answered, “No, you can’t, but God can.”

Rich
When I found out she was going to Vancouver at the end of January, to visit a close friend that is fighting cancer, I found out she was also going to have a two-day layover in Toronto to visit some of her former Chinese students. I asked her if I could possibly meet her for a cup of coffee while she was in Toronto. I was willing to see her for just two or three hours. But she rearranged her flight schedule, giving her an extra day in Toronto to spend with me. Then her Chinese friends invited me to come to dinner and to stay overnight and to go with them to Niagara Falls the next day before I returned home. So my two hours for coffee turned into two days.

We met at the airport at approximately 5PM Monday afternoon. We drove to a local hotel and got freshened up to go out to dinner. When I went to her room to pick her up for dinner I handed her a corsage. She is 51 years old, and she had never been given a corsage before. She seemed deeply moved, and a little flustered. We went to a little neighborhood restaurant, ‘Bo-Peep.’ We had a wonderful time together. We came back to the hotel and sat in the lobby talking until 1AM.

I told her I wanted to marry her, and she said she wasn’t ready, that she needed “more time.” I told her that was fine. I wanted her to hear from me that I wanted to marry her, but that I was willing to wait for her. Just before we went back to our rooms she gave me a ring that she explained her Mother had given her Dad. Her Dad died when she was 12 years old. Her Mom told her to give it to the man she was going to marry.

I barely slept that night. I was very conflicted. I wasn’t sure if I should give the ring back in the morning and simply drive her to her friends house and go home early, so she could enjoy her time and not have me hanging around her like a vulture. We met the next morning for breakfast in the lobby at 8AM. Before 9AM I had proposed to her again and she accepted. She explained she had just given in to last minute fears the night before.

Dvora
Rich is being so kind here. I was just plain scared to death! That morning my devotional was on “plans and realities.” The author wrote “We think ahead and carefully work out a plan. We picture in our minds with great detail how our future is going to unfold. But things don’t go as planned. Some doors close, while others open. If this happens to you, it may be that God has something completely different in mind! We must always be open to God-appointed changes in direction…”(from January 9, 2007, Our Daily Bread, Dave Egner) So I knew that this was really God’s leading and went to breakfast and told Rich, “yes.”

Rich
I went back to the room to get something as she fixed herself a bagel. Approximately 30 years ago I was engaged to be married, before I met the girl I did marry. I still had the engagement ring, and I brought it out to give to Dvora. It was a diamond, in a small dark green box. Her favorite color happens to be dark green. And the ring was quite delicate, which isn’t the norm for Israel, but it was a style Dvora preferred. Plus, it fit her ring finger. It was like the Lord knew 30 years ago that I would need that ring now. And I firmly believe He did.

One other little point about the ring. It had been misplaced for at least the past five years, ever since we had taken it out of the safe while having some construction done. Shortly after I started having contact with Dvora, but long before it became serious, I found the ring in a very odd place, in a box with a bunch of odds and ends. Once again God’s timing was perfect.

We are now engaged. She has major responsibilities in Israel through June. I need to get my work going better so that I’ll be more secure financially. We tentatively hope to married no later than October, but it could be as early as late July. There are so many details to work out it could prove to be a real challenge. But we are trusting God to continue to direct.

Very early on Dvora became very interested in my girls (12 & 16) that will be at home with us, She loves children and is the Godmother of three Chinese children in Israel. Being a Godmother is much more involved than what we think of. She named the firstborn, and she has been very involved in their lives. For a 51 year old single lady she has been prepared for the challenge of dealing with children better than most.

Dvora is a very Godly woman. She is a “Messianic Jew,” her father was Jewish and believed in Christ. She has been attending a Brethren congregation for the past 20 years.

As for her biggest struggle, and why she was afraid to commit, she really hates much of what she has seen in American Christianity over the years. Israel especially attracts all sorts of religious kooks from the US. She didn’t think she would ever leave Israel, but she does believe God has brought us together and that He is leading her in this direction.

Dvora
Re struggle, what he said is true, but also I’ve adjusted to Israeli society and the more relaxed way of working here, have my own home, and will miss my friends and Godchildren, but you see, the thing is, Rich is all I ever wanted in a man. Kind, loving, courageous, thoughtful, and he loves the Lord with all his heart. There are not that many men out there who really want Jesus to be first! That is really evident when he pray. I like that he is not ashamed to pray in a restaurant or in the car.

My heart went out to Rich and his children. I can only imagine how difficult it has been for them since his wife and their mother went to be with the Lord. I don’t want to replace their mother, but hope I can be a good friend to them.

The Lord is good 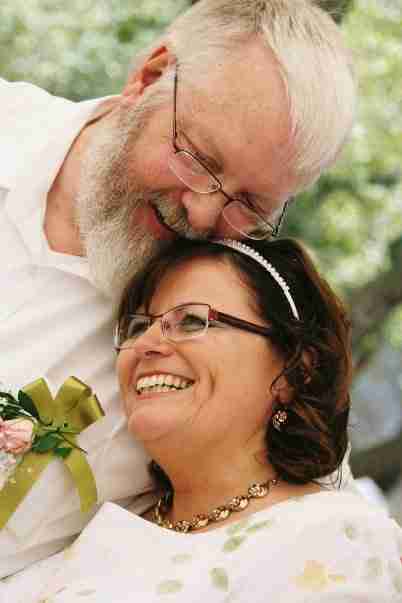